The solar eclipse and engineering The United States has just witnessed the first total solar eclipse in 38 years. For some US states people would have observed a partial eclipse, but for 14 other states, the moon would have blotted out the sun completely. 2 minutes and 38 seconds of darkness was experienced in Madras, Oregon.

The next total eclipse will appear in American skies on April 8, 2024.

An obvious impact of a solar eclipse is on photovoltaic cells that rely on the sun’s rays to generate power.

Steven Greenlee from CAISO - one of the largest independent grid operators in the world –commented, “Our solar plants are going to lose over half of their ability to generate electricity during the two to two and a half hours that the eclipse will be impacting our area,”

It is unlike a cloudy day because with an eclipse the loss causes a rapid decline and rebound of solar power that grid operators have to carefully manage. 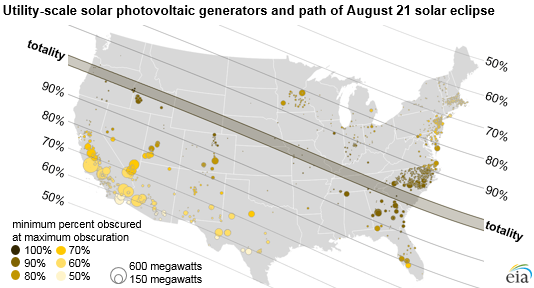 The U.S. Energy Information Administration (EIA) explained that 70 percent or more of the sunlight for utility-scale solar power plants would be obscured during the solar eclipse.

It has taken grid managers a year to prepare for the three hours of obscured sunlight. A startling fact when one considers that solar power only makes up 1 percent of the overall US power supply.

Another interesting fact: wind power cannot take up the slack during an eclipse and the drop in solar power because wind drops off too wind slackens during a solar eclipse as well.

Scientists and engineers have used the solar eclipse as a tool for research - keeping an eye on how technology reacts to an event that disrupts both space weather and weather itself.

Chasing an eclipse with engineering

Teachers and students in STEM-related classrooms in schools and universities across the United States ensured that they were ready for the solar eclipse; for example pinhole projectors were built to allow for the safe viewing of the event.

Utilizing specially engineered telescopes mounted to the front of two retrofitted WB-57F aircraft, NASA tracked the shadow of the moon as it shifted across the United States. The aircraft’s telescopes would also capture the Sun’s outer atmosphere (the Corona) during the solar eclipse and also took thermal images of Mercury. The sun’s atmosphere is usually harder to study without a solar eclipse, so it was a valuable moment in time.

The planes climbed to 50,000 feet, progressing through most of the Earth’s atmosphere to obtain the best images possible. Eleven other land-based investigations of the Sun’s atmosphere took place during the solar eclipse too.

Dan Seaton, a co-investigator of the project and researcher at the University of Colorado in Boulder, Colorado, believes the high altitude observations will be more advantageous than those from the ground. He spoke to NASA saying:

“These could well turn out to be the best ever observations of high frequency in the corona. Extending the observing time and going to very high altitude might allow us to see a few events or track waves that would be essentially invisible in just two minutes of observation from the ground.”

This quote that follows is anonymous, but reflects on most all of us during the light of day. Throughout the eclipse, however - just as with the night – most were perfectly still: