Home NewsThe American inventor who was also a President

The American inventor who was also a President

Abraham Lincoln was a politician, statesman and a lawyer — most well-known for being President of the United States. But did you know he also had a knack for engineering?

He lived a momentous life between 1809 and 1865. During his tenure as President, Lincoln led the nation through the American Civil War, built up the Republican Party and issued the Emancipation Proclamation which declared slaves within the Confederacy forever free.

However, it wasn’t until 1997 that it was discovered, surprisingly, that he had also patented a technology. Almost two decades before the Civil War, he invented a technology that would assist with ‘Buoying Vessels over Shoals’.

Shoals, also known as sandbanks, can obstruct a marine vessel’s journey — and this is exactly the problem that Lincoln wanted to solve. He had the idea to create a mechanism that could ensure buoyancy, to such an extent that the boat might clear the obstacle in its way.

Published in 1860, Lincoln’s autobiography recalls his teenage years. In 1828, Lincoln was offered a job by a landowner James Gentry. He was given the job to take a flatboat stocked with meats and other foods down the Mississippi River to get to New Orleans. Weighed down by its cargo, the boat struggled to undertake any journey without getting significantly slowed down or stuck completely. Cargo would then have to be taken out of the boat to make it lighter and pushed to get it going again.

In 1831, he continued taking trips down rivers with flatboats, this time for wealthy store owner Denton Offut. It was on these trips along the difficult-to-navigate Sangamon River, that Lincoln noted how challenging sandbars were. And so, he began dreaming up how to steer over the shoals without the boat coming to a stop or needing its cargo removed.

Lincoln was well versed in law and sometimes acted as a patent attorney. Therefore, he knew that in the future he could file a patent - for his bright idea that could help future sailors beat the sandbars.

His patent included fitting a boat’s hull with waterproof fabric bladders (or adjustable buoyant air chambers) that the travellers on the ship would inflate with air to increase buoyancy. It was filed years later in 1849. 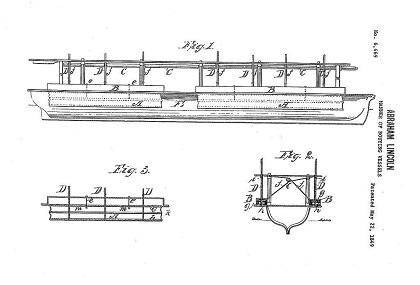 Lincoln recruited a mechanic in Springfield to make a model of the patent so he could test the feasibility of the transportation technology. But the technology was never to be realized. Politics proceeded to take over Lincolns priorities.

William H. Herndon, a law partner of Lincoln’s at the time, had his doubts about the device. He has been quoted saying:

“Occasionally he would bring the model into the office, and while whittling on it would descant on its merits and the revolution it was destined to work in steamboat navigation. Although I regarded the thing as impracticable, I said nothing, probably out of respect for Lincoln’s well-known reputation as a boatman.”

Edwards, Owen. “Abraham Lincoln Is the Only President Ever to Have a Patent.” Smithsonian.com, Smithsonian Institution, 1 Oct. 2006, www.smithsonianmag.com/history/abraham-lincoln-only-president-have-patent-131184751/.