A railway line near Aldershot in the United Kingdom is set to become the first railway line directly powered by a photovoltaic solar farm.

A 30kW pilot-scheme is currently paving the starting point of the project with renewable energy powering the signaling and lights on Network Rail’s Wessex route.

Whilst there is nothing new about solar panel technology keeping the lights on at train stations, Network Rail’s Aldershot project is the first time a solar array will bypass the electricity grid to plug directly into a railway’s “traction” system.

This groundbreaking solar movement is part of the Network Rail’s plans to completely avoid running trains on diesel. The benefits of this movement include the reduction of air pollution, greenhouse gas emissions, and costs. 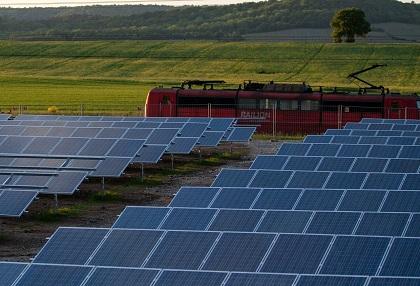 It was climate advocacy group 10:10 Climate Action and Imperial College London that got the ball rolling on powering UK railways with solar PV. Their campaign, named Riding Sunbeams, estimates that solar could power 20% of the Merseyrail network in Liverpool, as well as 15% of commuter routes in Kent, Sussex, and Wessex. Their website says:

“Direct solar supply of solar power to rail traction systems has never been done. But it has huge potential - from metros, trams, and railways in the UK and around the world. After extensive feasibility work and research, we’re almost ready to connect the first pilot solar panels to the railway.”

The Department of Transport in the United Kingdom, who backed the project, is keenly awaiting the results of the project’s results - they hope that the straight-solar process could be rolled out to other train stations around the country. They also hope this technology might extend to the tube and tram networks as well.

The directors of Riding Sunbeams say that technology could also transform railway industries in countries that rely heavily on trains. The Guardian reports that India ‘already has 250 trains powered by solar panels attached directly to the roof of the train, but it plans to develop its own trackside solar farms’.

The move would also open up employment opportunities for electrical engineers in the UK who can assist with rolling out the solar arrays for all train stations across the nation. Leo Murray, the director of the Riding Sunbeams project told media:

“Matchmaking the UK’s biggest electricity user, the railways, with the nation’s favorite energy source, solar power, looks like the start of the perfect relationship.”

“Helping to get the railways off fossil fuels in this way will cut running costs and benefit local communities at the same time as helping to tackle the climate crisis.”

Ambrose, Jillian. “Rail Line in Hampshire Is World's First to Be Powered by Solar Farm.” The Guardian, Guardian News and Media, 23 Aug. 2019, www.theguardian.com/business/2019/aug/22/rail-line-in-hampshire-is-worlds-first-to-be-powered-by-solar-farm.