The competition for space on your wall in your garage or in the basement of your business is heating up in the energy storage battle as more companies bring out their answer to renewable, clean energy units. Tesla’s Powerwall caught the attention of the public globally, whilst in Australia, Redflow’s ZCell impressed audiences. Now, Mercedes-Benz and Lockheed and Martin are entering the game, to confuse consumers even more as to who to give their money to. 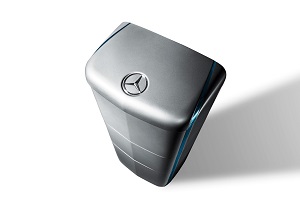 Therefore, Daimler AG with the contributions of Deutsche ACCUMOTIV have developed their own home energy storage systems and have begun shipping them. The companies supply the latest Mercedes-Benz models with their electric systems.

Harald Kroger, the Head of Development Electrics/Electronics and E-Drive Mercedes-Benz Cars said: “There is tremendous interest in our energy storage units and we have already received numerous orders. Over the coming months, we will continue to step up and expand both sales in Germany and on the international market.”

Daimler can reportedly connect up to 8 battery modules that have 2.5kWh each that would add up to 20kWh, which would provide a good backup system for grid peak times. According to their press release, the price for the photovoltaic cells would be calculated based on the customized package a customer would order. These would include the photovoltaic system, battery inverter, energy management services from Daimler and the Mercedes-Benz energy storage unit. Then installation costs as well.

In Daimler’s press release they spoke of the reliability of the product they are launching:

Their network of qualified specialist installers take care of providing the end customers with on-site advice, planning, compiling an individual quotation for all components and the actual installation. Stationary battery storage units are generally installed together with a photovoltaic system. Some 500 installers throughout Germany have already undergone training in collaboration with partners. 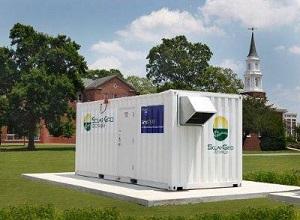 Lockheed Martin also wants in on the action, it seems. They are launching an industrial-sized photovoltaic system that trumps the current Tesla Powerpack. The Powerpack currently pushed out 100kWh, but Lockheed Martin’s will achieve both 250kWh and 500kWh depending on which one is purchased. For now, it doesn’t look like they will be doing private (home) energy storage systems, however, it seems they are trying to assist electricity grids around the world so that cleaner energy can be produced.

Whether or not Lockheed Martin becomes a major competitor remains to be seen due to their focuses on aerospace engineering that seems to be getting more attention than energy storage. Thankfully, the more entrants into the private and public energy sector mean more security training and further development in the industry which relates to safer batteries and a good selling price point.