Ancient engineering: The Lighthouse of Alexandria

The methods used by the architects and engineers in the ancient world often remain mysterious and enigmatic. How the Great Pyramids of Giza were built, for example, still manage to stump engineers and other experts from around the world. 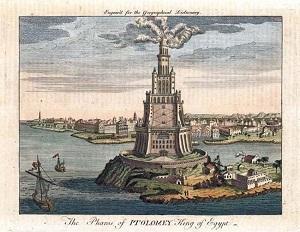 Neither the tools nor the techniques used to construct these complex and giant edifices can be fully explained. It is this fact that makes them one of the seven wonders of the ancient world.

The Lighthouse at Alexandria or Pharos of Alexandria is also considered one of those seven wonders.  It is an ancient marvel not ever replicated in the modern world; an example of engineering design that has been lost to history.

The Lighthouse, erected in the ancient Greek town of Alexandria, no longer exists. A spate of earthquakes between CE 956 and 1323 caused catastrophic failure. A remnant of a lighthouse, built to similar specifications by the Roman Empire, does however exist at Dover Castle in the United Kingdom. 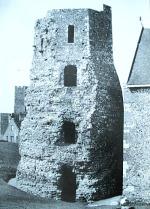 Pharos of Alexandria was engineered by Sostratus of Cnidus, the Greek architect and engineer in 280 BCE. It is said to have been the world’s first lighthouse.

It was also considered one of the highest buildings in the world, it stretched to 400 feet. But some believe it was originally 100 feet tall; the confusion allegedly stemming from the number of times the lighthouse was repaired after earthquake damage.

It had a square base made out of masonry blocks, lined with molten lead – this ensured a sturdy build that could withstand waves crashing into it.

Arab traveler Abou-Haggag Al-Andaloussi offers the most descriptive account of what the Pharos of Alexandria looked like. He wrote:

“The Pharos rises at the end of the island. The building square, about 8.5 meters (28ft) each side. The sea surrounds the Pharos except on the east and south sides. This platform measures, along its sides, from the tip, down to the foot of the Pharos walls, 6.5 metres (21ft) in height. However, on the sea side, it is larger because of the construction and is steeply inclined like the side of a mountain. As the height of the platform increases towards the walls of the Pharos its width narrows until it arrives at the measurements above.”

It is believed that a fire lit it at night, but mirrors reflecting the sunlight were used during the day. It is said that once the Romans had control over Alexandria, they utilized a rotating, reflective mirror system similar to that which is used today inside a modern lighthouse. 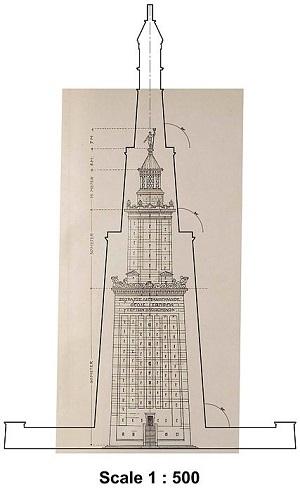 Rumor amongst historians and legend suggest that the mirrors could have been used for warfare too with the Romans manipulating the mirrors to defend the city from enemies. This involved focusing the rays of the sun onto the mirrors then reflecting this magnified intensity onto the oncoming ships, leading to their fiery end. Scholars remain skeptical.

Whether a war machine or not, it is still considered one of the greatest feats of engineering of its day. And for this glimpse into the ancient world of engineering our gratitude must go to the careful writings of a handful of Arab writers and 1st century Roman historian Josephus.

“Eye Witness Accounts of the Lighthouse of Alexandria, One of the Wonders of the Ancient World | 1001 Inventions.” 1001Inventions, www.1001inventions.com/lighthouseofalexandria.