Home NewsWhose fault is it anyway?

Whose fault is it anyway?

India’s government is under scrutiny after a bridge collapse in Mumbai left at least six people dead and 36 people injured.

This is the third foot-overbridge tragedy India has seen in just two years, placing a harsh spotlight on the shortcomings of India’s infrastructure sector who struggle to stay up to date with modern practices and maintenance requirements. 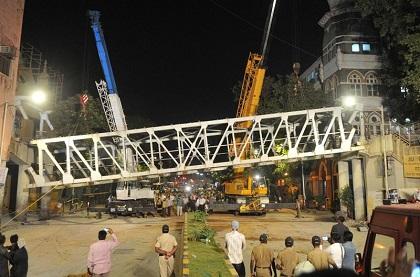 Shirish B Patel, an urban planner and civil engineer, says that what’s happening in the case of the various bridge collapses is a result of hastily appointed designers and engineers who are not necessarily the most skilled but the cheapest to hire.

“Over time the quality of design is sure to degrade, as designers pursue lowering costs and cutting corners rather than enhancing their skills. Salaries are cut, fewer of the brighter students enter the profession, and the downward spiraling cycle continues.”

Mr. Desai apparently neglected to tell official bodies that the bridge was in trouble of collapsing. Re-audits have now been issued for all the bridges in the city.

The issue of aging infrastructure is nothing new and something all countries in the world have to deal with. A recent report by the U.S. Department of Transportation has revealed that more than 54,000 American bridges are structurally deficient.

And as our global populations grow and increasingly migrate closer to inner cities, the infrastructure sector has no room for error.

Luckily, the civil engineering industry is seeing a range of new technologies and methodologies introduced into the sector, which promise to make processes more efficient and make structures more stable. The importance of communication skills for engineers