Structural engineers are reconnecting with nature

It’s a question more commonly asked of architects rather than engineers, how can nature inspire the design of structures? However, designing with or around the environment is becoming a common trend amidst the structural engineering industry. A newly constructed walkway in Denmark has nature as its main focus, and it is turning engineering heads.

High above the tree line at Camp Adventure in Copenhagen, a 45-meter high tower seemingly spirals into the sky above. At the top, an observer can enjoy a 360-degree view of the treetops of the Gisselfeld Klosters Forest in Denmark. The project was completed by Danish architecture firm EFFEKT and masterminded by a Danish NAVY seal named Jesper Mathiesen, who runs Camp Adventure.

A feat of engineering, the structure is a fourteen-story tower that features a spiraling walkway inside leading to the top. The structure is made entirely of weathering steel. The benefit of these steel alloys is that there is no need for painting as it has a natural rust appearance. The walkway within the structure consists of oak, which helps the structure blend in with the trees. 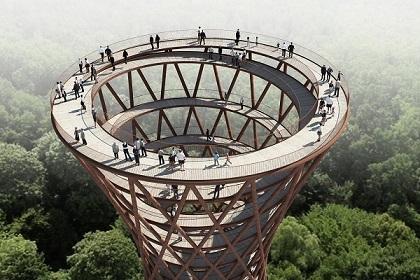 If viewed from far away, the tower has an hourglass shape, which Tue Foged, lead architect from EFFEKT, says is an intentional design that endeavors to respect the existing trees in the forest.

“Nature provides the real experience. We just made it more accessible and offered a series of new and alternative perspectives,” says Foged.

“The tower is shaped to enhance the experience of the visitor, shunning the typical cylindrical shape in favor of a curved profile with a slender waist and enlarged base and crown. This allows for better contact to the forest canopy moving up through the tower.”

The tower, which opened in March 2019, is an example of how structural engineering as an industry is looking back to nature for inspiration. However, this isn’t the first time designing with nature has occurred within the engineering industry. A decade prior, the New York High Line opened with a walkway through the natural environment of its own.

The High Line serves as an example of nature reclaiming its territory inside the concrete jungle. It’s a project that shows that structural engineering can have a secondary use.

The High Line is a 1.45 mile-long elevated linear park, greenway, and rail-trail that runs above a former railroad. It is a spur on the west side of Manhattan on the New York Central Railroad.

Over two hundred species of plants are spread out as vegetation on the former railroad in Manhattan. The High Line last utilized for railroad activities in the 1980s. The initial intention was to demolish the railway, but BuroHappold Engineering and Field Operations worked to reuse and re-integrate the line for its new purpose it serves today.

BuroHappold constructed two structures on the railway. One structure was named the Flyover, which was an elevated steel walkway engineered to appear as a levitating floor. The second structure was called the Cutout: which was a steel mesh deck providing views to the street below.

The High Line is now a park that the public can enjoy and where they can get a new feel for the city that they live in. Once a source of noise as the trains drove by, it is now a tranquil resting space.

The industrial past is now fused into the future-focused metropolis. With views of the Hudson River and the general cityscape, it is a popular destination in New York City. Encapsulating both New York’s heritage and future, while abiding by green construction imperatives, structural engineers have managed to work with the industrial past and bring it into an eco-friendly future.