Home NewsMaking fuel out of a world of plastic

Making fuel out of a world of plastic

Turning waste into a source of power is a big opportunity in the modern age. With the amount of plastic that is produced every day, building a cyclical ecosystem that can reuse plastic quickly is one way to reduce waste.

Emerging technologies invented by collections of scientists and engineers are springing up to assist with ridding the world of an overload of plastic.

A team of scientists at Washington State University has been hard at work turning plastic waste products into jet fuel. Hanwu Lei, an associate professor at Washington State University’s Department of Biological System Engineering said, “Waste plastic is a huge problem worldwide. This is a very good and relatively simple way to recycle these plastics.” The team’s project saw them mixing low-density polyethylene and daily kinds of plastics like water bottles, milk bottles, and plastic bags. They reduced the plastic down to the size of a grain of rice.

The plastic granules are then placed atop activated carbon in a tube reactor that runs between 430 degrees Celsius to 571 degrees Celsius — the carbon acts as a catalyst by speeding up the chemical reaction.

“Plastic is hard to break down. You have to add a catalyst to help break the chemical bonds. There is a lot of hydrogen in plastics, which is a key component in fuel,” Lei explained.

The result of their process is a hydrogen-based fuel that equates to 85% jet fuel and 15% diesel fuel. The catalyst can then be reused on more waste plastic.

“We can recover almost 100 percent of the energy from the plastic we tested. The fuel is very good quality, and the byproduct gasses produced are high quality and useful as well,” Lei said.

Entrepreneurs are trying to get in on the business side of turning plastics to fuel, as well. Sierra Energy raised US$33 million in a round of investor funding.

They have a patented technology named FastOx. It is a process of gasification which sees oxygen and steam blasted at high temperatures in a modified furnace filled with waste. In turn, this leads to a chemical reaction that creates syngas. 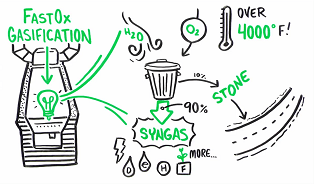 CEO of Sierra Energy, Mike Hart, told media, “It allows you to recycle the entire waste stream. The way we do that is by bringing the temperature of waste up to 4,000 degrees Fahrenheit, twice the temperature at the core of a volcano. At that temperature, everything breaks down molecularly.”

FastOx says that municipalities, landfills, waste producers, and developers should be looking at implementing the FastOx gasification technology. This syngas can be used to produce electricity, diesel, ethanol, hydrogen, fertilizer, and more.

The process produces 90% fuel. The ten percent of material left over is liquefied and recovered as metals and stone, which is sold off to construction companies that build roads — where it becomes part of the road base. As a result, there is almost nothing wasted; everything is reused.

The benefit of the processes from the University of Washington and Sierra Energy is that they are low-cost, efficient processes that can be replicated across a plethora of industries that produce waste plastics.