The new paradigm that exists in the modern engineering industry is the replacing of fossil fuel burning machinery with renewable, zero-emissions technologies. There is a growing public call for the re-engineering of automobiles, aircraft, trains and more, to power them in more renewable ways. Mechanical engineering and electrical engineering are coming together to ‘reinvent-the-wheel’ and design new technologies that produce zero emissions.

“In 2016 we set ourselves the goal of being zero-emission by 2040. We set this goal because we recognize that urgent action is needed on climate change, and we wanted to be part of the solution. However, setting the goal created a tough challenge. We have a lot of heavy equipment, like tugs, and in 2016 there were no zero-emission options.”

The RSD-E Tug 2513 tugboat, unfortunately for Auckland Ports, was not available in 2016. However, Dutch shipbuilder Damen will be delivering their new tugboat to them in 2021. The tugboat will be just as powerful as the diesel tugboats that they have been using for years. 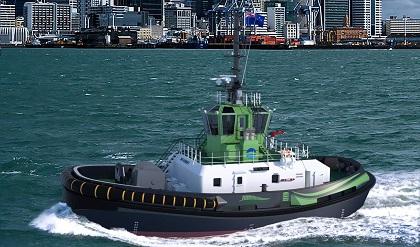 “We looked into the request and we saw that it was technically possible. The next step was to consider the feasibility of full electrical operation from a business perspective.”

What they had to do was look to battery technologies. They looked to what batteries were already on the market. They purchased those batteries and tested them out on crafts to see if they could test the efficiencies compared to the diesel alternatives.

They also found that the charging stations for the tugboats would be efficient. The tugboat will be utilizing a 1.5MW charger that will charge the tugboat up in only two hours. Seemingly, the technology is ready to deploy and could become a norm in the industry.

Damen says the batteries are stringed together so that if one battery fails, the next battery picks up the heavy lifting. Two 1000kW generators are on-board as well in case an electrical failure occurs - or if the tugboat has to tow something that is significantly bigger than what it usually tows. Damen wants to ensure people their all-electric with generators fitted in case of emergency is not a hybrid - they are confident the batteries will be able to power the tugboat at the same output as a diesel vessel.

Damen sales manager for the Asia Pacific region, Sjoerd de Bruin, said that the new tugboat will complete the green sustainability aims New Zealand has been aiming to achieve. He said:

“The RSD-E Tug 2513 completes the cycle of sustainability, being not only clean on emissions, but also in its source of power. This is great news for the region and also for other ports around the world with green ambitions. Ports of Auckland have taken a bold step in pioneering the use of fully electric harbor tugs and it is an honor to work with them on this project. This aligns neatly with our mission of reforming the maritime industry. We are not only building a tug, we are using disruptive technology to help serve the energy transition.”