Home NewsCan we get 90% of the globe connected to the internet by 2050?

While the Engineering Institute of Technology has campuses in Perth, Western Australia, and Melbourne, Victoria, we predominantly run as an online institute that sees thousands of students logging in and out every day. For students who are part of our online learning cohort, internet connectivity is imperative.

We are proud to have students from all over the world who have earned Australian accredited diplomas and degrees through our unique online delivery model. We are, however, aware of the challenges many countries face with limited internet connectivity. 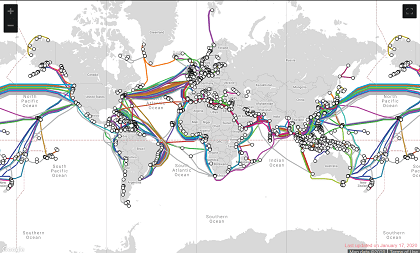 According to Internet World Stats, there are 525,148,631 internet users in Africa. The continent’s population is said to be 1.216 billion people, according to estimates compiled in 2016. About 690 million people are, therefore, without access to life-changing internet technologies.

Facebook and Amazon have been experimenting with the research and development of internet-for-all technologies. Engineers are deeply involved in how nations connect to the internet. While philanthropic companies undertake the challenge of creating new, still-to-be-debuted, mobile internet technologies, the tech that connects the world to the internet has its fair share of maintenance issues.

How is the internet provided to the world?

Ninety-nine percent of international internet data is transmitted through a series of submarine cables spread across the ocean floor across the globe. There are 300 undersea cables transmitting data underwater, ensuring nations get internet connectivity.

However, when these connections become damaged, the internet traffic from the directly affected countries is rerouted through working cables. This impacts speed and accessibility.

For example, on the west coast of Africa, the West Africa Cable System (WACS) and South Atlantic 3 (SAT3) form international links that connect southern Africa to the world. On the east coast of Africa, the SEACOM and EASSy cables are receiving rerouted international internet traffic from the western parts of the country where the cables are down.

This meant internet service providers had to continue buying international bandwidth from SEACOM to keep international traffic ticking along for their consumers.

The future of internet connectivity

Are undersea cables set to be the norm for internet connectivity a century from now? Is South Africa’s cautionary tale of gale-force winds and broken undersea cables enough food-for-thought for engineers to come up with more innovative ways of connecting the world to the internet?

The U.S. Federal Communications Commission (FCC) has given the company clearance to launch 12,000 small satellites and may allow them to push the number to 42,000 in the future. Around 242 satellites are already in space. Ongoing research and development of internet technologies, such as SpaceX’s Starlink, are going to have to go into hyperdrive to meet the UN’s target of 90% of the earth’s population being connected by 2050.

The Commonwealth Scientific and Industrial Research Organisation in Australia (CSIRO) identified key megatrends shaping our lives for decades to come. A megatrend is seen as a long-term trend that affects... Read more

The Power of Fungi

As food fungi are renowned for their meaty, Unami flavor. In engineering, it’s equally beefy as part of sustainability. These fungi can do a lot more than we thought. For... Read more

Made to Move: a Deep Dive into Vibration Analysis

Out of all the components and areas of study, few are as unique and ultimately vital within a subsect of Mechanical Engineering as Vibration Engineering and Analysis. Photo by Thomas... Read more
We use cookies on our website to give you the most relevant experience by remembering your preferences and repeat visits. By clicking “Accept”, you consent to the use of ALL the cookies.
Cookie settingsACCEPT
Privacy & Cookies Policy