A tale of two above-water railroads

In the 1800s the United States was industrializing to the point where New York and San Francisco, states that were quite literally on opposite sides of the country, needed to figure out a central point at which they could trade with each other. They would, via their respective railroads, meet in the middle at a trading port in New Orleans. However a lake stood in their way, Louisiana’s Lake Pontchartrain.

The railway, at over nine kilometres long, is the longest railway crossing over water on earth and the longest railroad bridge in the United States. Engineers completed the bridge over 130 years ago. Back then, it was entirely made of wood. Now it is a concrete ballast deck bridge. The bridge provides a pathway into New Orleans and is still to this day a vital piece of infrastructure for the trading of goods within the United States.

However, with a low lying concrete deck bridge comes a problem; boats can not pass underneath the bridge.  In solution to the issue, engineer William Donald Scherzer came up with the idea of the rolling bascule bridge. A 66 meter long Scherzer bridge fitted to the railway raises the span by rolling on a track with a 830-tonne counterweight that takes the bridge skyward.

“We have machinery at the top of the bridge that is powered by two electric drive motors. There are two pinions and those pinions rotate across a rack system. Essentially what happens is, it applies force to open the bridge.”

In 2005, the bridge was put through its biggest challenge yet; Hurricane Katrina. It led to the damaging of 7.5 kilometers of railway was swept off the bridge and into the bottom of the lake. Maintenance teams had to use cranes to pull the railway back onto the bridge deck. Only 16 days after Katrina made landfall, the engineers managed to get train services restored

At the end of 2018, Indiaopened their latest dazzling marvel of engineering; the longest combined rail and road bridge. It is named the Bogibeel Bridge. It crosses over the River Brahmaputra, sitting between the Dibrugarh and Dhemaji districts of the northeastern state of Assam. The bridge stretches to a length of 4.94 kilometers.

It has been a long process from laying the foundation stone of the bridge in 1997 until its operation in 2019. The bridge was delayed due to a plethora of issues, ranging from lacking the appropriate technology, subsequently missing deadlines as a result, and the rising costs of construction. 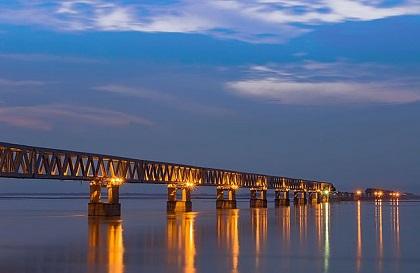 Engineers have essentially changed the lives of the people of Dhemaji with the construction of the bridge. The bridge has provided easy access to hospitals, education institutes and the Dibrugarh airport. The railway also bypasses 705 kilometersthat passengers would have had to endeavour before the bridge’s construction.

When all the delays were figured out, the bridge’s construction went ahead. Standing atop 42 pillars which were constructed using state-of-the-art Germany engineering technology, the bridge was welded together. The welding of the bridge has ensured it is significantly lightweight when compared to riveted girders. Engineers also had to account for the rising of the Brahmaputra river which swells during rainy seasons. Consequently, they built the bridge 32 meters above the river water level.

The bridge has a lifespan of 120 years, and is the second longest bridge in Asia. And now, it is the darling and pride of India.

“All You Need to Know about Assam's Bogibeel Bridge - How Special Is the Bogibeel Bridge.” The Economic Times, economictimes.indiatimes.com/news/politics-and-nation/all-you-need-to-know-about-the-bogibeel-bridge/good-governance-day/slideshow/67241699.cms.