A small engineering college makes waves across the Indian Ocean

This week the Engineering Institute of Technology (EIT) received some important visitors. A delegation of three (the CEO and two supporting managers) from the Engineering Council of South Africa (ECSA) spent two days at our head office and on our campus in Perth, Western Australia. ECSA is the equivalent of Engineers Australia, but with greater regulatory power. 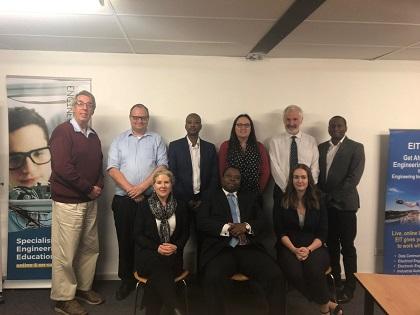 Their mission was to learn more about the online and blended learning platforms available for engineering education. The result of their research will be two-fold. South African education institutions can look forward to a robust set of protocols and standards on which to base their online learning methodologies. And those students unable to study on campus can look forward to an effective online education in engineering.

With a rapidly growing population the vocational and higher education institutions in South Africa are struggling to accommodate students of engineering. The option of expanding existing campuses, or building new ones, cannot be considered at this stage.

With this in mind Mr Sipho Madonsela, CEO of ECSA, explained that the wake-up call for regulators came with the student-based fees-must-fall campaign. In 2015 students began demanding free education and the resulting upheaval meant the universities had to abandon their lectures during those critical months leading up to the end of year exams. Many proactive and innovative engineering departments began offering lectures online to students unable to reach the campuses because of the student blockades. The efforts of the departments, however, were at best chaotic.

For Mr Madonsela, his colleagues and engineering Deans around the country an alternative approach is required; an approach methodically researched, planned and regulated.

We at EIT were delighted to show-off our online and blended platforms of learning to the ECSA team. Our students, based in over 100 countries, access a range of engineering diplomas, bachelor or master degrees, while they work.

We showcased the live, interactive sessions presented by our large pool of engineering practitioners and lecturers from around the world. They stream into the on campus classrooms and onto the computers of those students studying online; providing a ‘virtual’ forum where students and teachers can meet and discuss the content of their courses.

The ECSA team noted the benefits of EIT’s Learning Support Officers who are dedicated to the welfare of the remotely-based students.

They also became a little more familiar with EIT’s virtual and remote labs that interface with real equipment and which the students use to apply their learning. The inextricable link between engineering and technology means the internet has become a key part of modern engineering education and offers equivalence to physical delivery modes.

The ECSA team appreciated the importance of EIT’s remote invigilation software which was developed in house (and which continues to be honed in collaboration with Curtin University). It ensures student integrity – fundamental to quality education, whether delivered in a classroom or online.

EIT was honoured to host the ECSA delegation. We look forward to furthering the association as the Council prepares the online standards for South African engineering education.